Pure Vibes with Made Kuti & The movement featuring The Cavemen

Following the release of his debut album and the success of his command performance at the Terra Kulture, Made Kuti and The Movement are back with another night of pure vibes at The Oriental Hotel on October 29th 2021 with the critically acclaimed duo The Cavemen.

Made for Vibes
Made Kuti's early years were spent growing up in The New Afrika Shrine. The son of Music Maestro Femi Kuti and grandson of Fela, he was surrounded by music early on – fiddling with instruments as a toddler. He played the trumpet at three, took to the alto sax at five years old, picked up the piano at eight years old, the drums and guitar at twelve, and the bass at fifteen. As a child, he toured the world with his father's Positive Force band, playing legendary venues like Glastonbury and the Hollywood Bowl at the age of eight.

He studied at the Trinity Laban Conservatoire in London – where Fela attended – and is a multi-instrumentalist composer who plays up to six instruments including: the saxophone, trumpet, guitar, bass and more. On most days, he practices intensely for up to seven hours, moving seamlessly from instrument to instrument. He enjoys genres such as Jazz, Alternative Rock and of course, Afrobeat – all of which have helped fashion his own unique musical style. He released his debut album, ‘For (e) ward’ in February 2021, packaged together with his father's album 'Stop the Hate'. Both albums make up separate sides of a double album titled, 'Legacy+'. Made features on both projects, playing bass on 'Stop the Hate' and every instrument on 'For(e)ward'. 'For(e)ward' is a modern manifesto, pushing the boundaries of Afrobeat, and with it, Made addresses Nigeria's many societal ills such as poor governance, social inequality and police brutality.

Continuing with the Kuti legacy of speaking up for the everyday Nigerian, Made and his father took to the streets to partake in the 2020 #ENDSARS protests, which denounced police brutality in Nigeria. On April 4th, 2021, he made history, headlining his first show at the Shrine with his newly formed band, The Movement. Together, they performed songs such as Made's single, 'Free Your Mind' and his stellar rendition of Fela's 'Trouble Sleep Yanga Go Wake Am'. 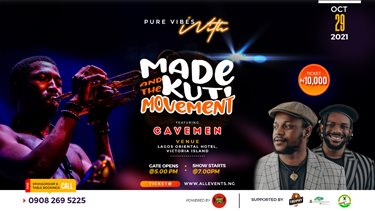 
The order could not be created - please check that all fields are correctly filled in.